Our little Chris Hanel didn’t want to do the stripper thing for his bachelor party so I was pressed to come up with something. I put feelers out and Mike Chow came through with a phone call to Andy Bloch. I exchanged a few emails with Andy and he agreed to come down and play Hanel heads-up. He even offered to give up the shirt off his back (literally).

I had called the MGM and they agreed to spread a mixed game for us (HORSE). Joaquin’s contact over there was very helpful and when I showed up Mary, the shift manager, was more than happy to see us. We played for about an hour or so and then Andy Bloch comes walking in. 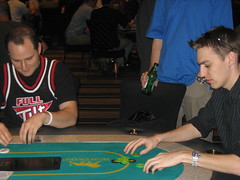 I went off with Mary and we worked out the details on dealing a heads-up freeze out between Hanel and Bloch. $2000 in chips each and escalating blinds. Since Andy had already told me via email that he was bringing one of his Full Tilt jerseys for Hanel I declared that the loser had to give up his shirt. 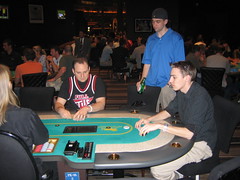 The match stayed pretty even for a long time but Bloch finally got the better of Hanel and busted the bachelor. Being the good sport he is, Andy didn’t make Hanel pay up and still gave Hanel his personal Full Tilt basketball jersey.

BTW, I already reviewed Andy’s DVD but I’ll second the recommendation that you go out and buy it. The product is top notch and Andy’s a stand up guy.