It’s a chilly Sunday afternoon as I race down Washington Blvd towards Marina del Rey. Of course, in Los Angeles chilly means anything below 60 degrees so it’s somewhat relative.

The Marina is my old stomping grounds. I live there from 2000 until 2004 and I know every shortcut there is to know. I zip up to the Ritz Carlton and as I look around at the Ferrari’s, Rolls Royce’s, and other exotic cars I resign myself to the fact that I will likely never own a car deserving of being parked up front of this hotel.

I check in and am handed a room key for 1001. I drop my bag and suit off and head down to 628 where Rick is throwing a pre-party party. Beers, mixed drinks, and Hawaiian Punch flow as Rick pumps tunes out of his laptop.

Various co-workers pop in and out (mostly in) as those of us with the foresight and total disregard for money wait until the very last possible moment before heading to our rooms to slip into our formal clothes. Phil Gordon stops by and has a beer before heading down to the party. 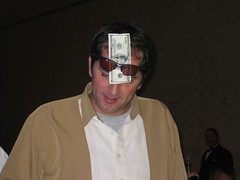 I make my way down to the ballroom with Henry and Sophia and a gaggle of others. There are already a lot of people milling about when we arrive so I immediately head to the bar to reload after grabbing my tournament seating assignment. John Juanda asks me who he needs to talk to get a seat in the tournament and I direct him to our fearless tournament director. 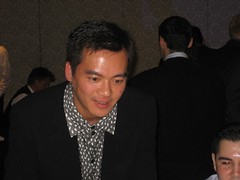 Everyone is eventually corralled into the room and we take our seats for the tournament. I have the pleasure of being at the table with John Juanda, Rick, and several of my other co-workers. I’m also seated about 3 feet from the PA so I get to spend the entire evening with Hanel’s voice being broadcast into my soul.

I pick off the blinds one hand but don’t really see many good cards. Rick busted Juanda previously in a tournament and he’s announced that he would like to pull a repeat performance. Juanda just laughs.

I catch ATo in middle position and raise it up. Juanda calls in LP and everyone else folds.

I know Juanda doesn’t have a Q and I’m pretty sure I have the best hand here. If I bet out, Juanda might lay this down and I’m not really sure I want him out of the hand just yet. I check. John looks at me and informs me that he has a really good hand. He stares at me a bit and then announces he’s betting $200.

The right move here is to raise so I can see where I’m at. That being the case, I call. 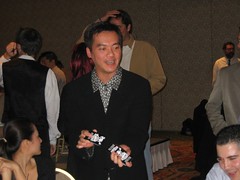 I’ve paired up with the best kicker. Now I know I have him beat. I’m going to let him bluff at it again so I check. John smiles and says, “I’m going to show you one of my cards,” as he exposes a jack and throws another $200 into the pot. He hasn’t taken his eyes off me for a moment and I’m staring back at him, both of us with half grins on our faces. I widen to a full smile as I flip up my ace and tell him, “I’ve got a pretty good hand here too, John.” I call.

Not the best card in the world for me because it could have made a straight but I’m still pretty sure I’ve got the best hand here. Would Juanda really bluff at the pot three times? I check. Juanda bets $300 and I’m a little worried now. He wants a call with a bet that size. If he pushed I would have insta-called but $300 is exactly the size of bet that reeks like that’s the most he thinks he can get out of me. I call.

John shows me the Q and I muck my hand crippled but not out. So much for going with your reads.

The tournament was designed to end quickly so the blinds start escalating every 30 seconds. Ok, maybe not every 30 seconds but fast enough that within a few orbits I’m looking at a stack that’s just a little too big to get action if I push but short enough where I’m nearly pot committed once I see a flop. 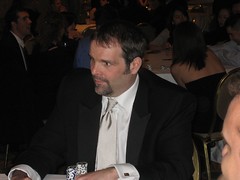 Missing my opportunity to double up I soon find myself in serious trouble. I look down and see AJ and push. Juanda calls with K8 and hits an 8 on the flop. I fail to improve and John meets me half way around to table with a hand shake and a few kind words.

I run into Andy Bloch near the bar and we chat for a bit about an instructional DVD he’s working on. I saw Andy several times at the WSOP this year but I never spoke to him. I wish I had. He seems like a really nice guy.

I mingle with some of my fellow co-workers out on the patio. Although I’m good friends with several of the people I work with, there are inevitably others you just never have an opportunity to actually talk to about anything other than work. It was interesting to meet some of these folks in a more social setting. 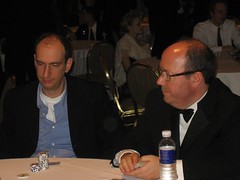 They ring the cowbell calling us to dinner but it isn’t long before I find myself out on the patio again. Phil Gordon is challenging anybody willing to put up at least $100 to a Roshambo contest. Best of 5 and as a holiday present Phil is spotting everyone 1. Phil loses match after match after match. I go to grab another drink and on my way back out Phil says “Let’s go for $100.” I peel off $100 from my money clip and he lays a crisp $100 bill on the table. We tied it up 4 â€“ 4 and then I bust him when he goes scissors and I go rock. Sweet! 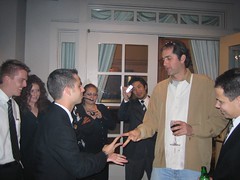 As the evening started to wind down I grabbed a cigar from one of the tobacco rollers that had been hired for the event. We gathered out on the patio and a bottle of 25 year old Macallan’s was busted open. Cigars and scotch whiskey, an excellent way to end an evening.