After fleeing my room like a refuge in order to avoid the constant nagging of the cleaning staff, I headed over to the Rio to do some meet ups and check out what has become of our fair sport.

The first thing you notice when you enter via the convention center entrance at the back of the hotel is that you are not allowed to walk from Point A (the entrance) to Point B (the hospitality suites). You are forced to go through the expo room. I guess Harrah’s was charging top dollar and had to guarantee foot traffic because the security people were very adamant about this rule. 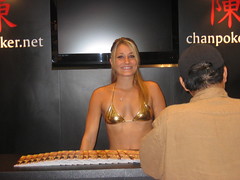 You walk into the expo room and if you spent more than two minutes working for a dotcom during the heyday, you recognize it for exactly what it is; a room full of people who don’t have to justify ROI on their marketing investments.

There are, of course, the booth babes who know absolutely nothing about the product but claw and paw at you to enter their little sanctum so you can be pitched on their master’s product or services. There are the free stress balls, t-shirts, magazines, pens, cup holders, keychain fobs, and miscellaneous swag being forced at you at every turn. There are the massive booths, big screen plasmas, drawings, raffles, and carnival barkers trying to draw your attention at every turn. 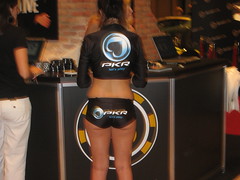 In other words, it’s pretty cool.

You can, and I did, spend several hours going around and checking out each booth. All the biggies were represented; Party, Stars, Full Tilt, Paradise, UltimateBet and Bodog. There were countless smaller poker rooms and products ranging from glue to aura readings.

Later I would meet up with April and together we would explore the relationship between the size of a poker site and how much they relied on sex to sell their product. PokerStars and Full Tilt were excellent examples of rooms that didn’t try to overtly sell themselves using sexy women. Now, before the gals working the Full Tilt booth put a contract out on me, I’ll defend that last sentence by saying that both sites tended to use people actually affiliated with the business rather than hiring a bunch of for-hire hotties and pounding passerby’s with sex. 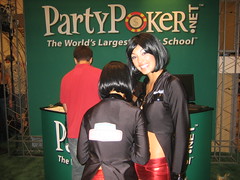 Party had the short wig girls but they weren’t overt about it. They were at least mostly clothed and didn’t do a lot of slinking up to you to try to lure you inside. UltimateBet and Paradise, likewise, had hired professional models and they showed slightly more skin than did the previously mentioned rooms but it wasn’t excessive. 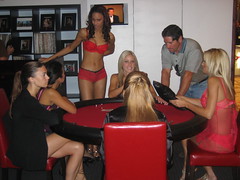 Now, as anyone who has seen any their marketing might expect, Bodog was all sex. You could play poker against girls sitting around in their bra and panties or you could go upstairs and lay on a bed as three models in lingerie beat you up with pillows. BTW, when they’re done, you get to keep one of the pillows. 🙂 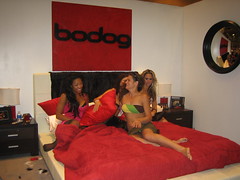 But, just as April and I predicted, Bodog is the smallest of all of the previously mentioned big sites so the sexiness was amped up compared to their competitors.

I finally make my first, of what would be many laps, through the expo and over to the Full Tilt hospitality suite. I run into some folks I know and we hang out in the back section as pros filter in and out while on breaks from the play.

I decided to go check out the action at the tables and headed over to the main room where they were playing. To my surprise, they now bar spectators. Even worse is that, for some reason, they considered me a spectator and refused me entrance. Not exactly deterred by rent-a-cops without guns I simply walked down a few doors, waited for someone to exit and did a movie theatre special.

After saying my hellos to Pauly and Kristen, I found Ryan and wished him luck. With no other spectators around I felt I was sticking out like a sore thumb so I decided to cut out before being thrown out. As I exited, rent-a-cop asks me if I have my media pass or buy-in receipt. I respond no and he says “Well, if you don’t have it we can’t let you back in.” I simply chuckle knowing that his empty threats can’t be enforced. On a side note, they did beef up security and I was unable to re-enter the main room until they opened it to the public later in the evening.

After going back and chatting with some folks at the Full Tilt hospitality suite, I did another buzz on the expo floor armed with a good knowledge of where to score the cool stuff.

I went by the PokerStars booth and asked it they expected Wil or Otis to be around. The lady looks at me blankly. “They work for PokerStars,” I offer. The first lady gets a second lady who tells me that Wil stops by from time to time but that she’s never heard of Otis (I used his real name too just in case they didn’t know him by Otis). 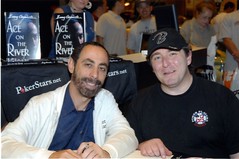 By chance I ran into PokerProf who was manning the PokerPlayer Magainze booth.

I ran into WSOP bracelet winner and second place finisher in the very first WPBT tournament, Max Pescatori, at the Doyle’s Room booth. He was signing autographs with Todd Brunson but I didn’t really see him until I had taken a step or two past him and so when I made the half turn to wheel back I caught eye contact with Todd Brunson.

Todd asks me if I want an autograph and now I’m stuck. I don’t want to seem like a fanboy but I’m also not looking to appear rude. I finally decide of the two choices I would prefer to look like a fanboy and get his autograph. When he’s done I go back to Max who doesn’t recognize me. That’s okay because at best the last time I saw Max was briefly at the Commerce over a year ago. 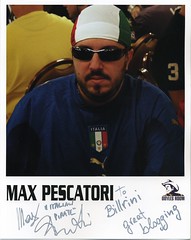 I introduce myself and Max is like “Ahhhh . . . . Bill Rini. Yes, I love the blog.” I glance over and get a weird look from Todd Brunson and Cyndy Violette who seem not to know what to make of that. Just to go for the hat trick I ask Cyndy for an autograph as well.

It’s running late so I head back over to the good old Tropicana to get some of that sleep that the cleaning lady robbed me of.

Bloggers Covering the Main Event
Beer and Breakfast with Ryan and Otis at 4am
Seeing Miami Vice with Ryan: A film review