We drove up to Phetchabun the day before meeting Sa-ard (Wanphen’s mother). It’s about a four hour drive from Bangkok but takes six when you factor in all of the bathroom and food breaks.

We spent the night at Ked’s place and in the morning Ked called Sa-ard to remind her that we were coming. Sa-ard asked if there was anything she could prepare hinting that she had no idea what farangs (foreigners) eat. Ked told her not to prepare anything special for me.

We piled in the family pick-up truck and headed out the 110 kilometers (65 – 70 miles) or so to where Sa-ard lived. As we turned off the main road we passed endless rice fields. We passed water buffalo calmly grazing next to the road. We passed middle-aged women sitting on the shoulder of the small highway fishing in the stream gorged from the recent monsoons. We passed an elderly man on a bicycle that looked as old as he was. I guess what I’m trying to say is that even though I thought downtown Phetchabun was the sticks I didn’t even know what “the sticks” was. Even Ked who hails from Phetchabun said “Her house is out in the countryside.”

Sa-ard’s home is typical for the area. A very vague concrete foundation. It’s two levels with the first being mostly wide open with no walls. That serves as a place for people to cook, eat their meals, and socialize. Upstairs is an enclosed area consisting of a bunch of wood planks serving as walls. Because the wood used to make the walls is old, was probably never treated, and has to endure punishing heat and humidity it has shrunk in places and you can see gaps between the beams. The roof is metal siding fixed together. There is no air conditioning. Floor fans are used when it becomes too hot (remember this is a country where the temperature ranges from 85F/30C to about 100F/38C year round). During the monsoon season there is little to keep the rain from seeping through the places where the wood no longer comes together. 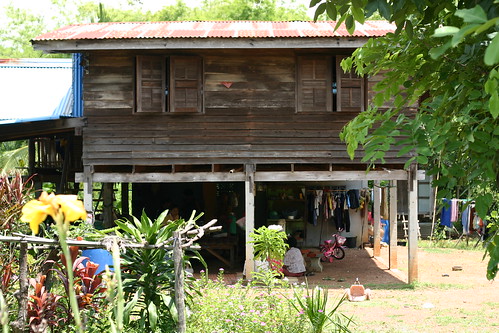 When we pulled up to Sa-ard’s home we were greeted by a small army of sisters, neighbors, village leaders, etc. I’m fairly sure that many in the assembled group had never even seen a farang in their lives before other than in movies or magazines. I was like a circus sideshow. With the exception of the village leader, not a one person spoke even a single word of English. Surprisingly the village leader’s English was quite good and I might even take a guess that he’s studied abroad. 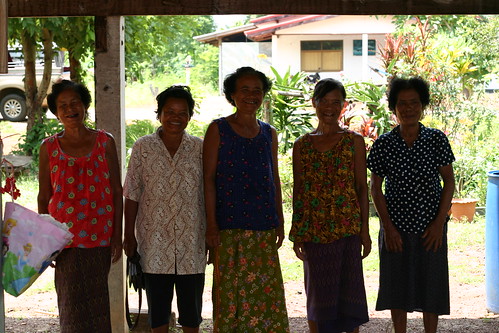 Because Ked, her aunt, and her uncle had been up there previously and had met Sa-ard it broke the tension a little bit. I was asked if I wanted to take a tour of the home and Sa-ard led me and Ked around the upstairs portion. As soon as we stepped in the room the heat was overwhelming. As most people know heat rises and the second floor seemed to serve the single purpose of catching all of the heat. It didn’t help that the metal roof acted like a heat conductor. After a few seconds in what felt like 100 degrees (38 C) I said, “Oh roon mak, mak,” (Oh, very hot)” Sa-ard chuckled a bit. I’m not sure if it was because she agreed with my assessment of the conditions or she was amused at a farang butchering her language. 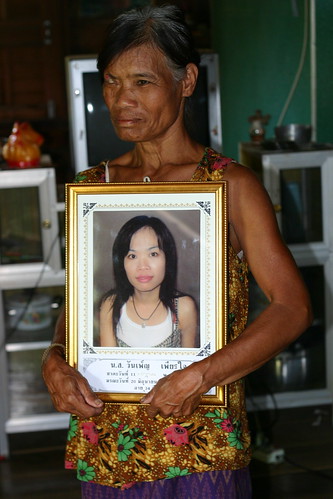 We went back downstairs and Sa-ard’s sisters had put together a small feast. On the way we had bought half a BBQ’d chicken to give to Sa-ard and that was served with several dishes they had whipped up. Unfortunately, my stomach was suffering a case of the rumbles so I decided to stay safe and just have some sticky rice. 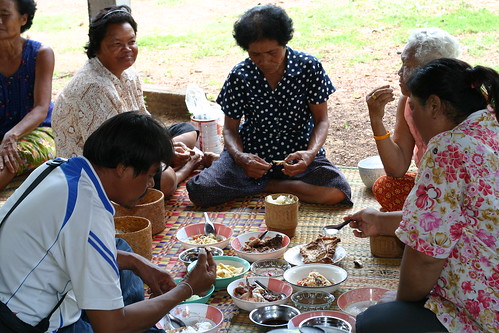 After everyone declared “Im” (full) Ked explained why we had come up and why we were raising the money. Sa-ard brought down a letter sent to her by the Phuket Rotary Club granting Wanphen’s children Farm and Iang scholarships amounting to 6,000 baht (about $193 USD) a year each while they stayed in school. If either of the children wanted to attend university they indicated that they would review that with her when the time came. Amusingly everyone there translated “Rotary” to “Lotary” and thought it had to do with the lottery. I had to explain what a rotary club was and everyone seemed to do that embarrassed chuckle when they realized how far off they were.

We did a video interview which I hope to put together soon. I haven’t even taken a look at the raw footage so gotta do that.

At the end of the interview I gave Sa-ard an initial installment on the funds we’re raising of 5000 baht ($161 USD). After the cameras stopped there was a really touching exchange between Ked and Sa-ard. Sa-ard told Ked, “Every day I think she’s coming home but I know she’s not. She just had bad luck. She met the wrong man. If she had good luck she would have met someone like him (me).” Then Sa-ard asked Ked how to say “Thank you” in English and gave me a wai and said “Thank you.”

I caught the gist of what she was saying but it’s always hard when you’re unsure of specific words. I asked Ked what she said and I could see her eyes welling up. She said, “give me a minute.” Then she gave me the translation and said, “Wow, I almost cried there. I didn’t think I was going to get like that.” 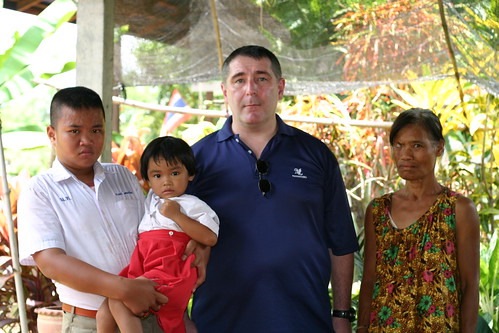 Wanphen’s two children had been fetched from school by the village leader and they joined us for some photos. Farm, Wanphen’s daughter, seem absolutely terrified of me. I even tried to conjure up whatever little Thai I speak to try to break the ice but it didn’t help much. It’s okay though. She’s such a cute little girl. 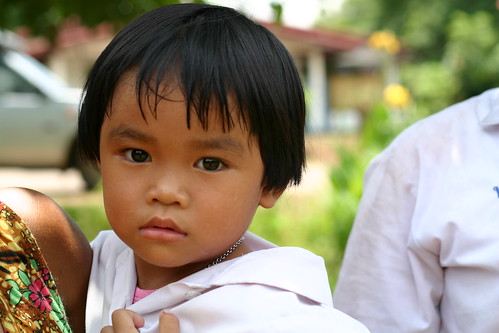 I’ve never seen Wanphen’s son smile. In all of the pictures I’ve seen posted of him he always has a very serious look on his face. Even if the first few pics we took together he put on the serious look. I did get him to smile though and got a picture of that. 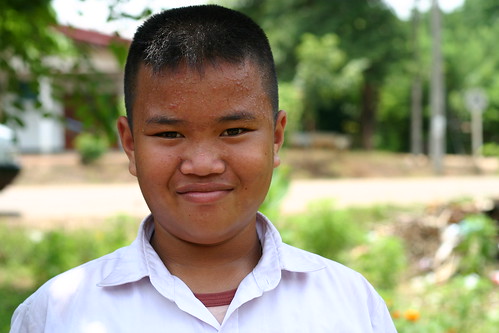 I have to say that after this visit I’m more convinced than ever that helping out this family is the right thing to do. They’re good people. It’s such a shame what has happened to them. Like Sa-ard said, Wanphen just happened to run into some bad luck. What if she had been sick that day? What if she went home early? What if another customer had invited her out that night? What if Fanelli had gotten a phone call from a friend with some good news and he decided not to go out that night or at least went out in a different frame of mind? So many, “what if’s” and yet everything lined up the way that it did.

If you would like to donate to our fundraiser for the family, you can send money on PokerStars or Full Tilt. On Stars, I’m billrini and on Tilt I’m billytwoguns. If you want to donate via PayPal send me an email and I’ll send you my PP details.