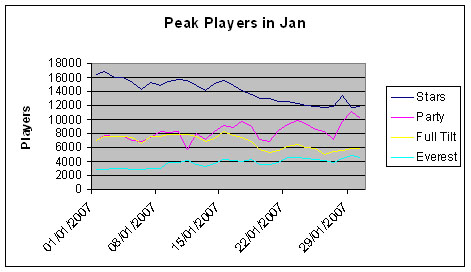 Looks like numbers have begun to stabalize a bit for Tilt and Stars though that stablization has been in just the last week so it’s difficult to say if this level holds, is a temporary pause on a continued decline, or a floor from which they’ll bounce off of.

The early Jan numbers from Stars might have been a little inflated due to a rare (for Stars) reload bonus. Players were likely playing a little more than usual trying to burn off their reload.

Tournaments this week were hard to compare week over week due to changeups in guarantee amounts.